The University culture here, and I am guessing all through England, is so vastly different than that of MSSU (my home institute). The differences are everywhere and everyday I discover something new. I’ve been dedicated to experiencing the life at Bradford to its fullest while I am here.

At the University of Bradford (UoB) there are sports clubs for all the sports you could think of and some you didn’t even know existed, like Netball. In my first week I attended refreshers fair. This is a fair where all the sports clubs and other societies recruit more people. The student centre is full of tables of people trying to get you to join their club. Unlike in the U.S. anyone can join any sport. It doesn’t matter if you don’t even know how to play it. Each week the clubs have practice sessions to train beginners and regulars on the sport. The best of the clubs members represent the club as a team and compete with other Universities. I didn’t reach out to any new sport I’ve never heard of, but rather joined a sport I already love to play, volleyball. Each club also has weekly socials. By going to these socials I have made many friends. They are all very welcoming.

By joining the volleyball club I have been able to participate in some other new adventures. One of which they call intramurals. In the states we know intramurals as when a group of your friends forms a team to compete with other teams at your university in a series of games in only one particular sport. This is not what intramurals are in England. Here, it is when your club or society forms a team of 10 people to compete in 14 sports in two days. At first I was really confused because it would be impossible to compete with all 13 or 14 teams in every sport in only 2 days. It turned out that you only compete with each team once in a different sport. So if you happened to be paired up against the field hockey team in playing field hockey, you were going to lose. This is what happened to my team. Continuing with the volleyball theme, our name was Sets of the Beach. The first day we did rather well, winning rowing, rugby, ultimate frisbee, tug-of-war, and netball and only losing lazer tag and field hockey. I really enjoyed field hockey because you can  basically get away with tackling the opponent and stealing the ball. The second day did not go as well, we lost our first event of athletics (essentially we played tag and we were slower.) We came right back with a win in badminton, then lost in archery and pool. Our spirits were pretty down by the time we got to football (soccer), but we managed to win playing 13 on 13. Right after football we played rounders. Its basically wiffleball but with weirder rules and the dumbest ball ever. The ball is almost a baseball so you can’t manage to catch well without gloves. We lost even though we had two Americans on our team, myself included. The order of these games may be well off, but you get the idea. At some point in the day we played volleyball and won by a landslide. This was my favourite moment of day two because I got to make the final point for our team. It didn’t really matter though because we were up by so many points when the time ran out, but I felt like a superstar. At the end of the second day was a huge party with a blow up obstacle course and mini golf. Also this is where we participated in our final sport, rock climbing. We lost due to tiredness (at least that is what I am calling it). At the end of the day our team ended up coming in somewhere around 6th place, but we won Best Team Spirit. We were pretty happy or should I say, spirited ;D . 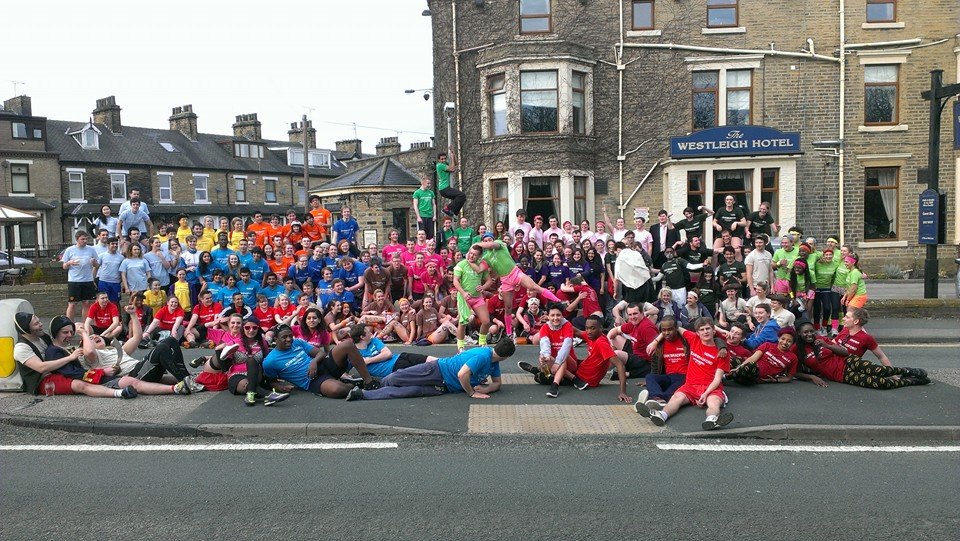 All the intramural teams 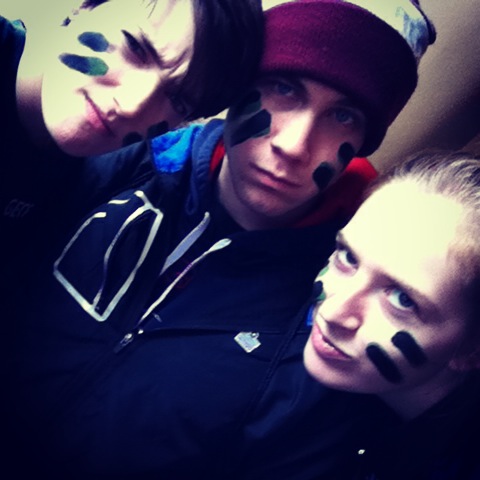 Julia, Rob and I with our warpaint 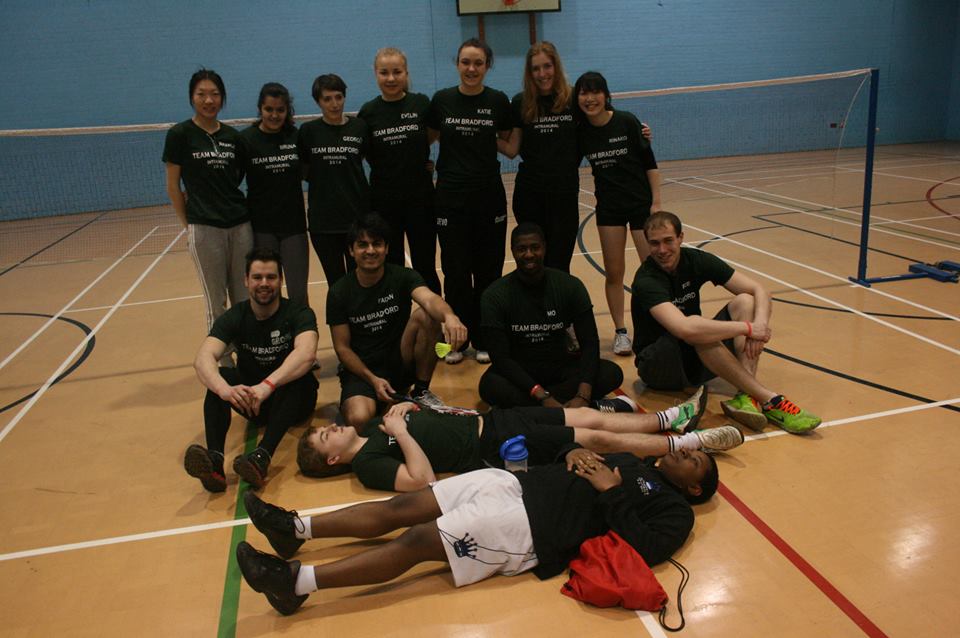 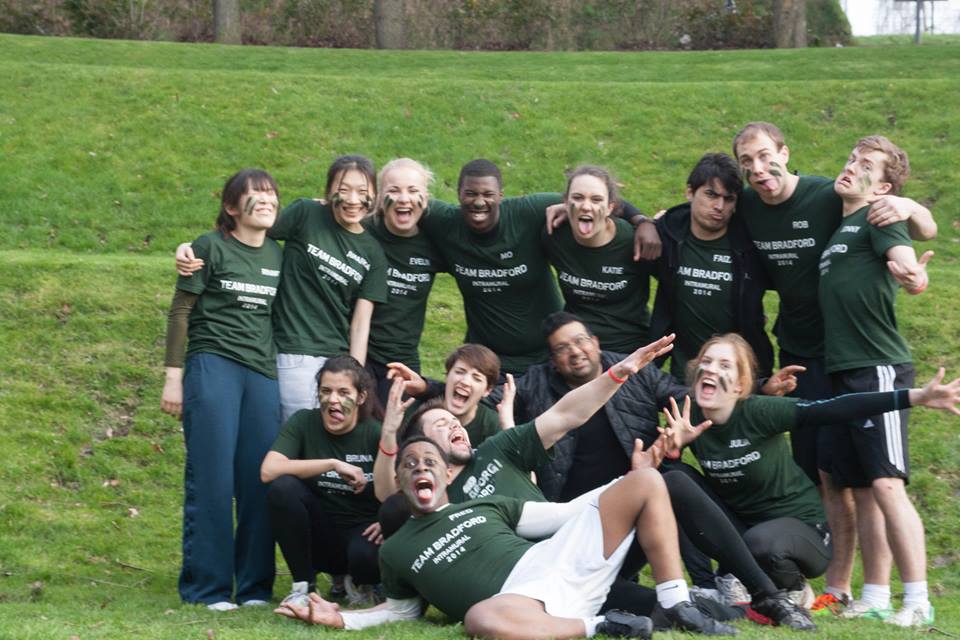 our team being silly 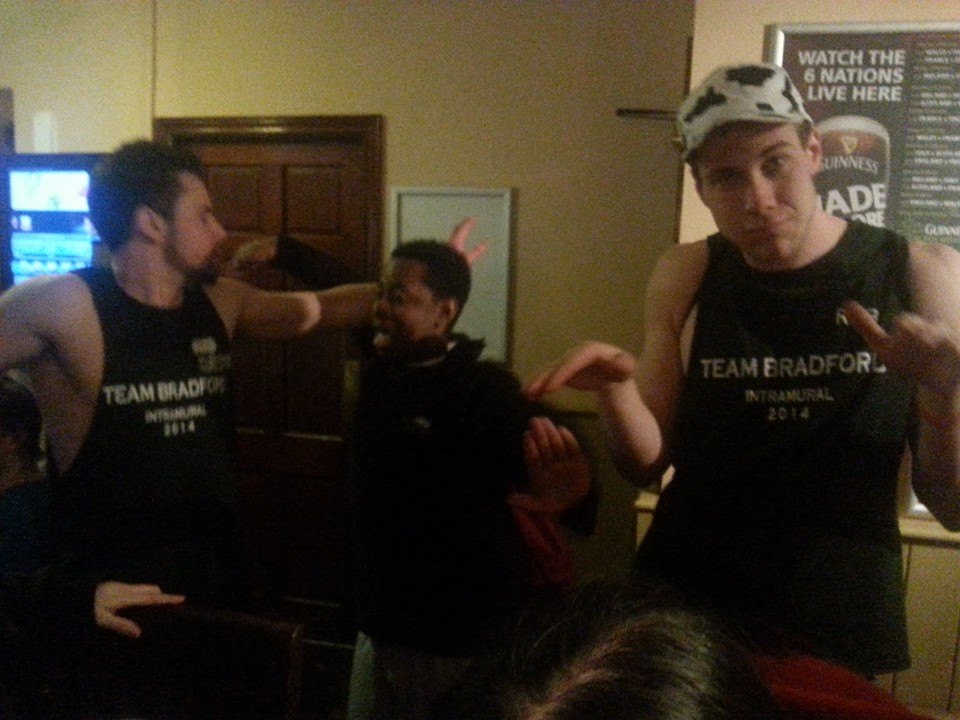 Celebrating being Best Team Spirit (or just dancing because they can)

Another great part of being a member of the volleyball club was attending the Colours Ball. When most of us hear about a Ball we either think of a sphere of fun or dancing in Cinderella dresses. It was neither of these. I would more describe it as an awards banquet. Everyone dresses in fancy dresses and suits and eats dinner in a ballroom (maybe that’s where the ball part comes in) While everyone is eating awards are given out to outstanding athletes/members and clubs/societies. The food was delicious, the company splendid, and I got to dress up. It was a great night. Our president and our VP both won an award, and although we were up for five awards as a club, we didn’t get any. After the dinner most of us went to the student centre and danced with other students. 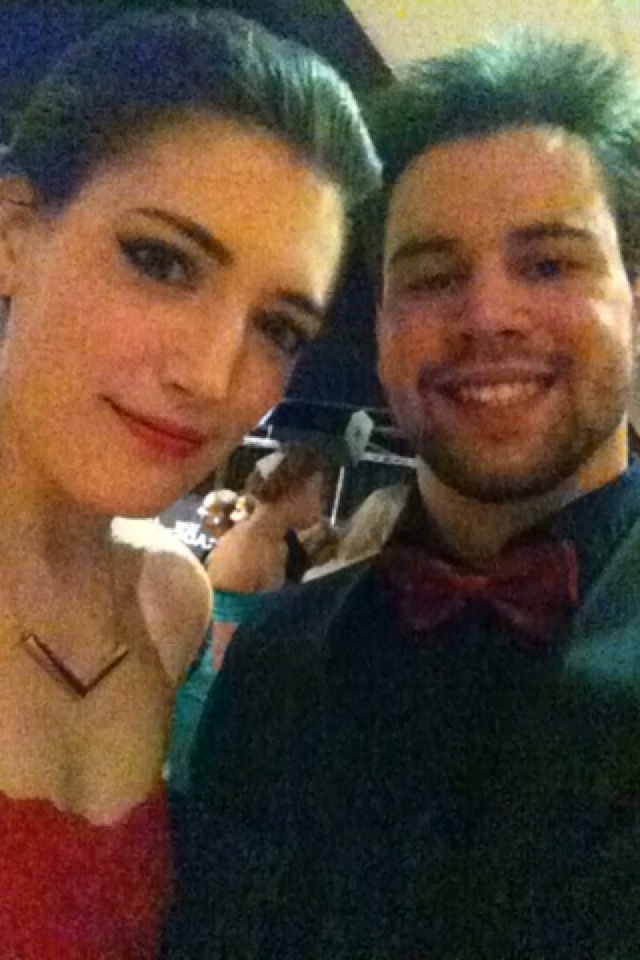 Georgi and I at Colours

Fred, Georgi, and I 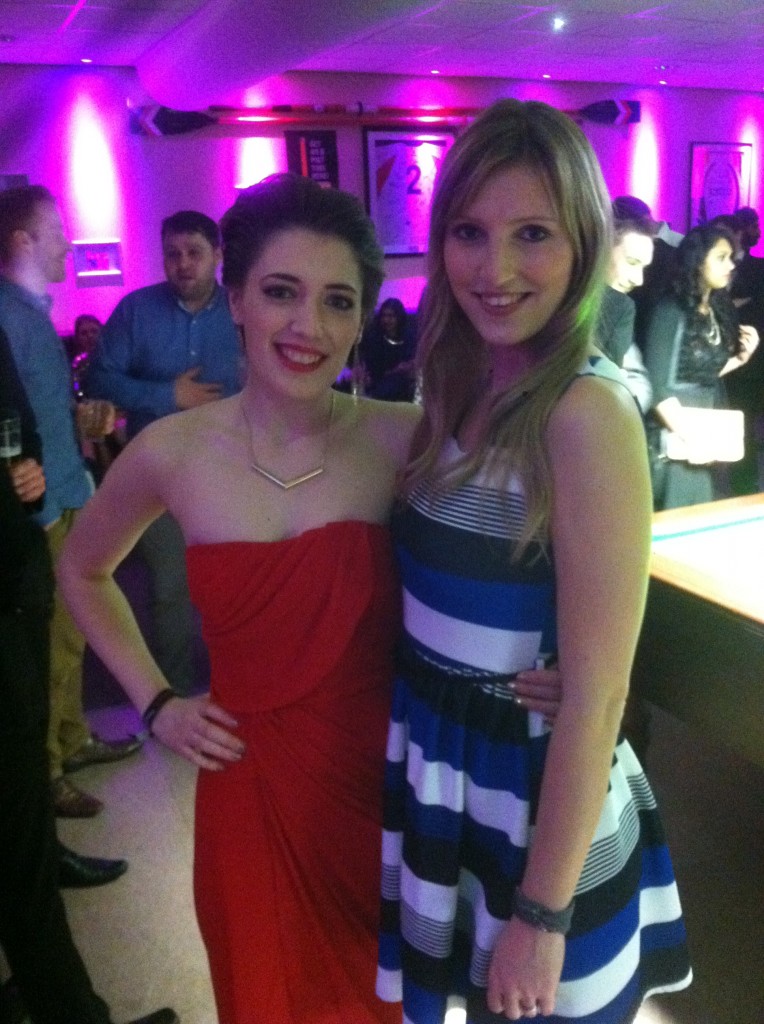 Barbora and I at the after party 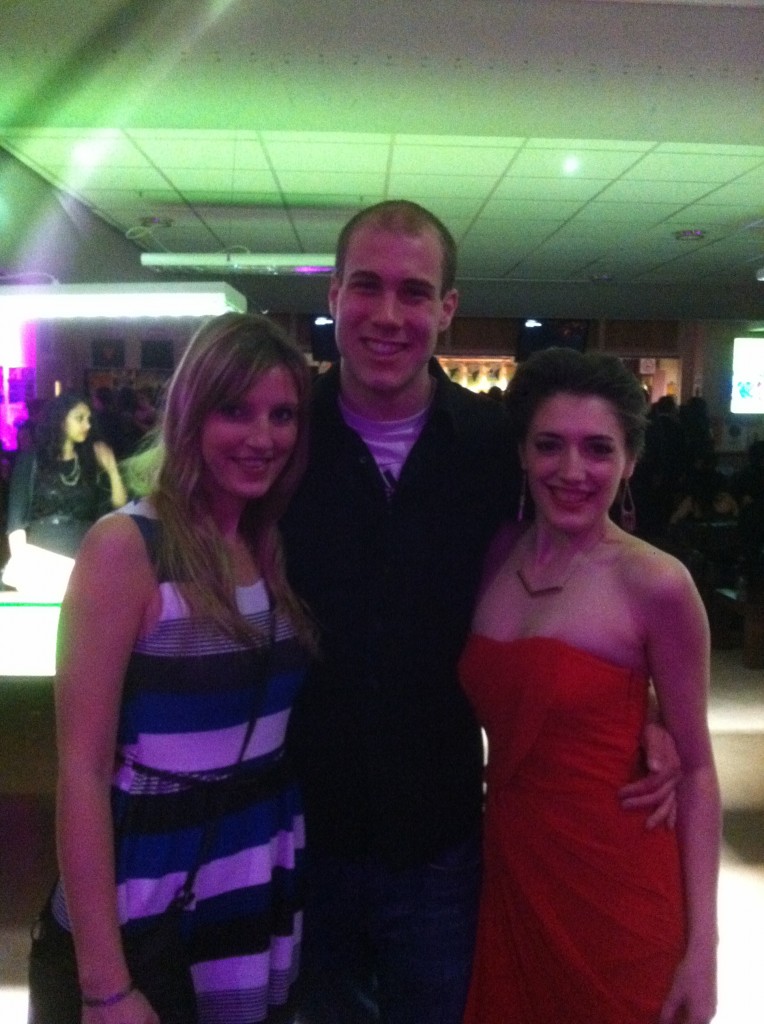 Rob, Barbora and I at the after party

I haven’t joined any other societies while here, but I have made friends apart from the volleyball club. There is a group of international students that usually hang out on Friday nights, and sometimes I join them. The University is a very diverse school. I have hardly met any students that are actually from England. In fact, I have been keeping a list of countries from which I have met someone. Currently the list is as follows:. I didn’t expect such an environment when anticipating my study abroad experience. In my mind I was going to a stereotypical British town where every one wears bowler hats and speaks with a posh accent. I expected my classmates to regularly (daily even!) enjoy tea time. I thought every one ate a “proper English breakfast” every morning, and scones were everywhere. I have yet to partake in either of these things. It just doesn’t happen, at least not for Uni students. Also Bradford isn’t so quaint and posh. Instead the streets can be pretty dirty and they hand out rape whistles during your first week here. It scared me a bit at first, but I’ve come to find it more dirty than harmful here. There is an exception to the sketchiness of the city. That exception is the city centre. It is full of newer shops, a mall, and a newly added, very pretty fountain. Also in the city centre, is a Starbucks. From my dorm, it is only a 10-15 min walk to get Starbucks or go shopping. My bfb (Best Friend in Britain), Barbora, and I sometimes spend some of our day in the city centre. We get starbucks, sit by the fountain, and try on fun dresses. 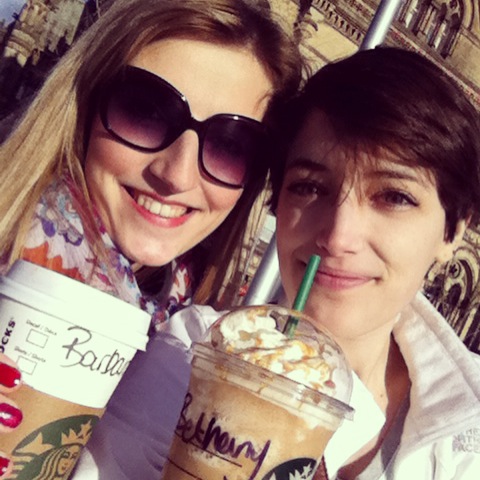 Drinking Starbucks by the fountain on a rare sunny day 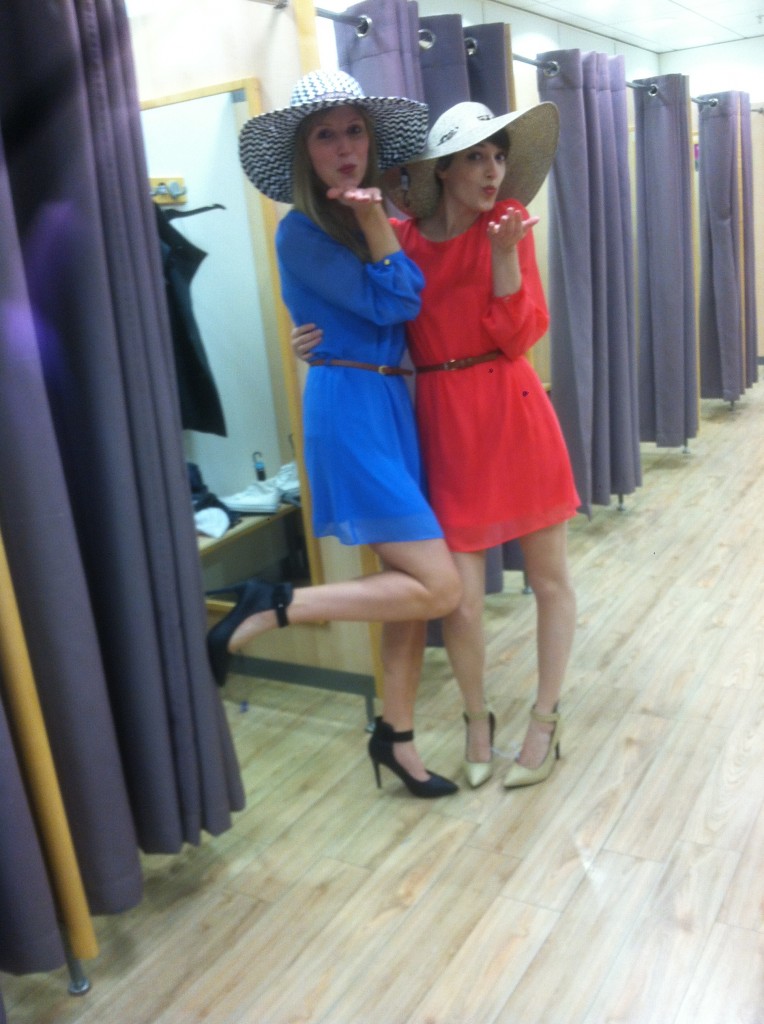 Speaking of dresses. University students in Bradford dress so completely different than the students at MSSU. It is not surprising to find most of the girls wearing skirts, dresses, or shorts with tights and a cute top to class. It doesn’t matter if it is below freezing or pouring rain, every student looks like they are going to class to give a presentation. At MSSU and most US colleges it is faily common to see students in sweatpants, t-shirts, gym shorts, and trainers (tennis shoes), but you don’t find that hear. There are no girls chatting with their besties all dressed alike in yoga pants, hoodies, uggs/toms, and Jansport backpacks. In fact, most students don’t use backpacks. They show up to class with a notebook (maybe) and a pen. This is because each class (they call them modules) has a lecture only once a week. It isn’t unlikely that a student would have just one lecture a day. Excluding Mondays, that is the case for me. I still wear my backpack nearly every day, and I usually stick out in my yoga pants, hoodie, and toms.

On my days off of school, its easy to go on a day adventure. I have had a couple to the neighbouring towns of Leeds and Skipton. My trip to Skipton with Barbora and Rob was an athletic one. Like a lot of the international students do, we went hiking. Here is another difference between the U.S. and England. As far as I can remember, trails in the U.S. are pretty well marked. Usually they are worn down enough to tell where you are going, otherwise they have coloured markers. This is absolutely not the case of England trails. There is little to no evidence you are on a trail at some points, and junctions of trials give no indication which route to take. Because of this, we found ourselves wandering lost through fields of heather. With little time left of sunlight, we decided to back track and found our way back to the trail head. Other than getting lost, the hike was exhilarating. As we ascended the “mountain” that overlooked a reservoir, the morning fog was lifting. At one point, we faced the fog and watched as the chased up the hill and broke around us. The view at the top was breath-taking. Just below the fog were fields of heather and pastures of sheep dotted with farmhouses. 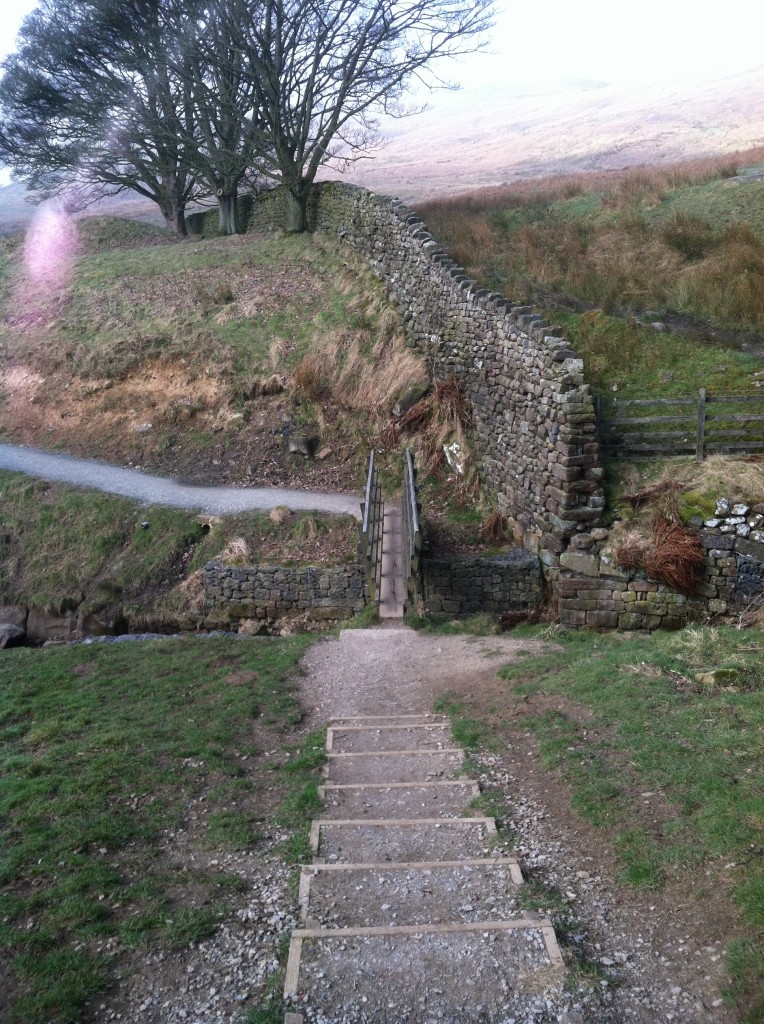 The beginning of the trail 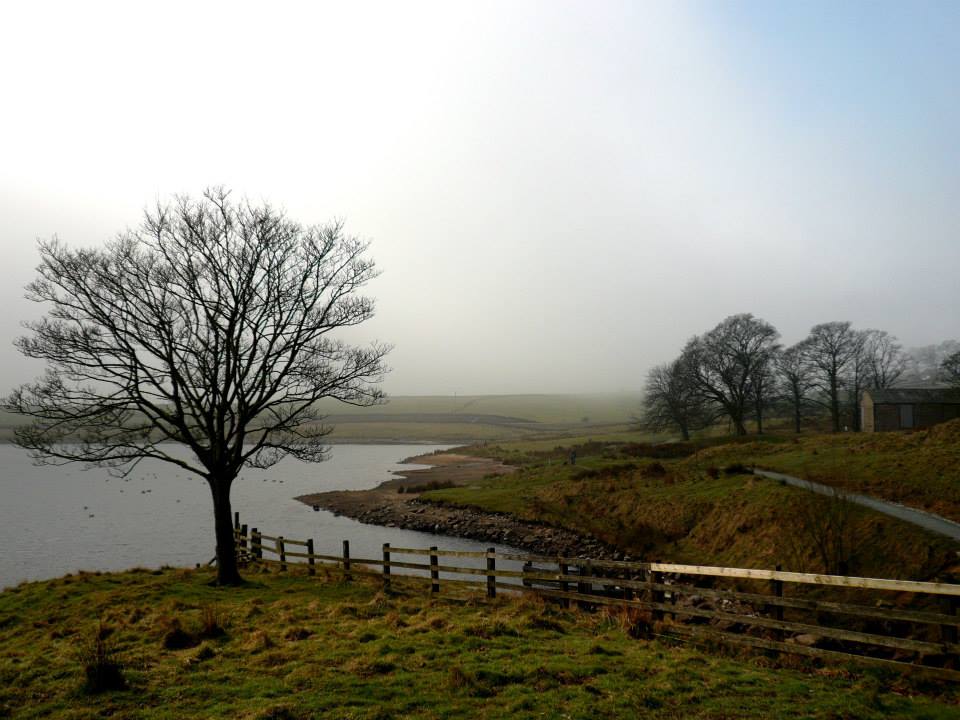 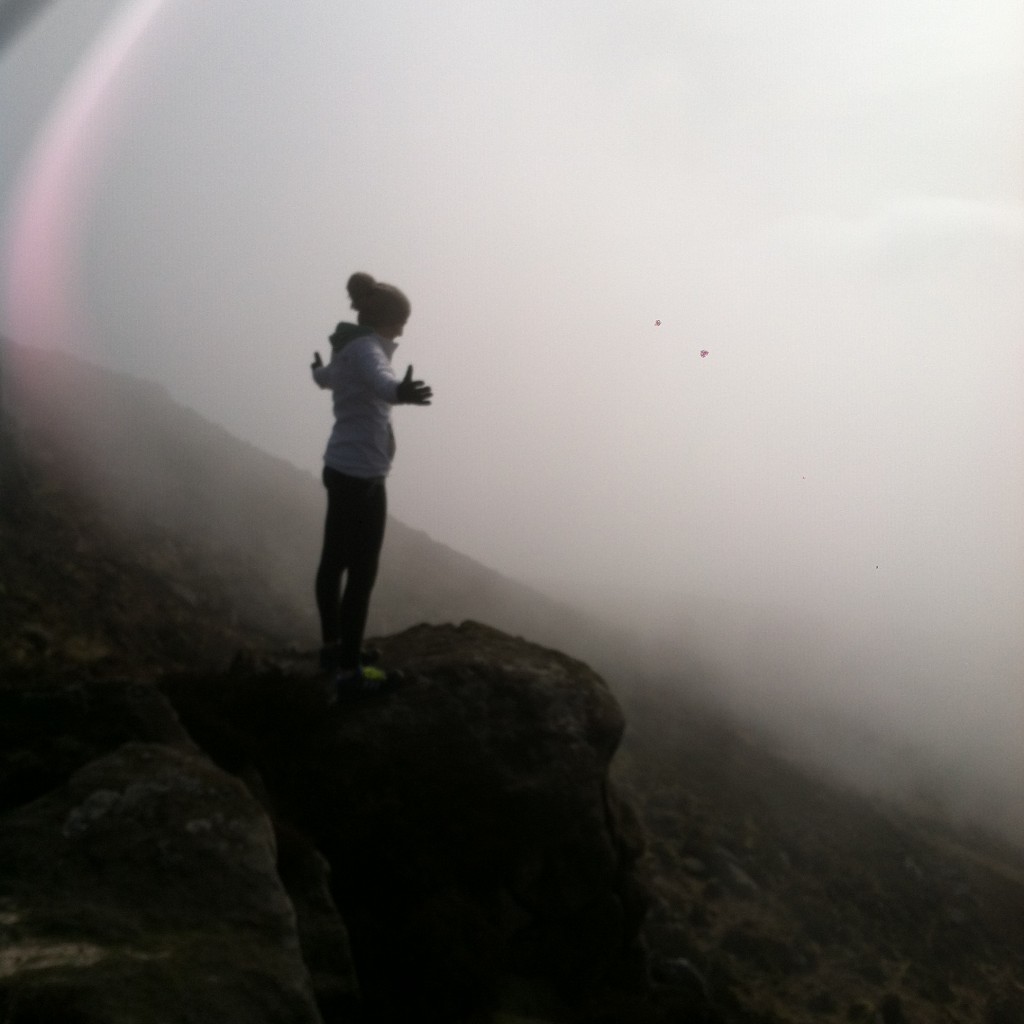 Almost to the peak 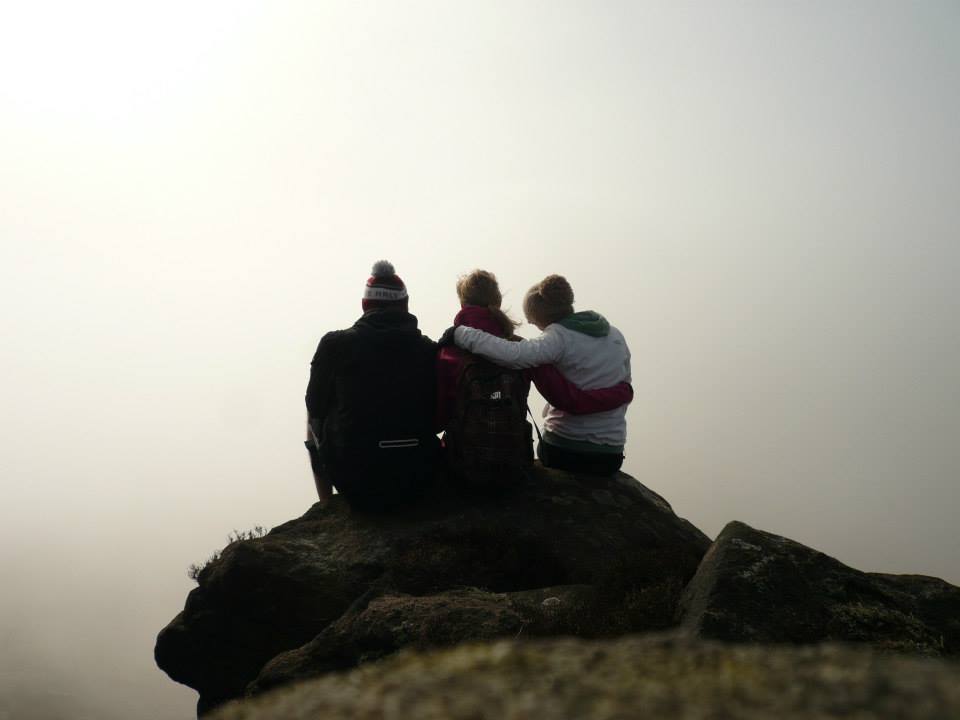 The three of us near the top 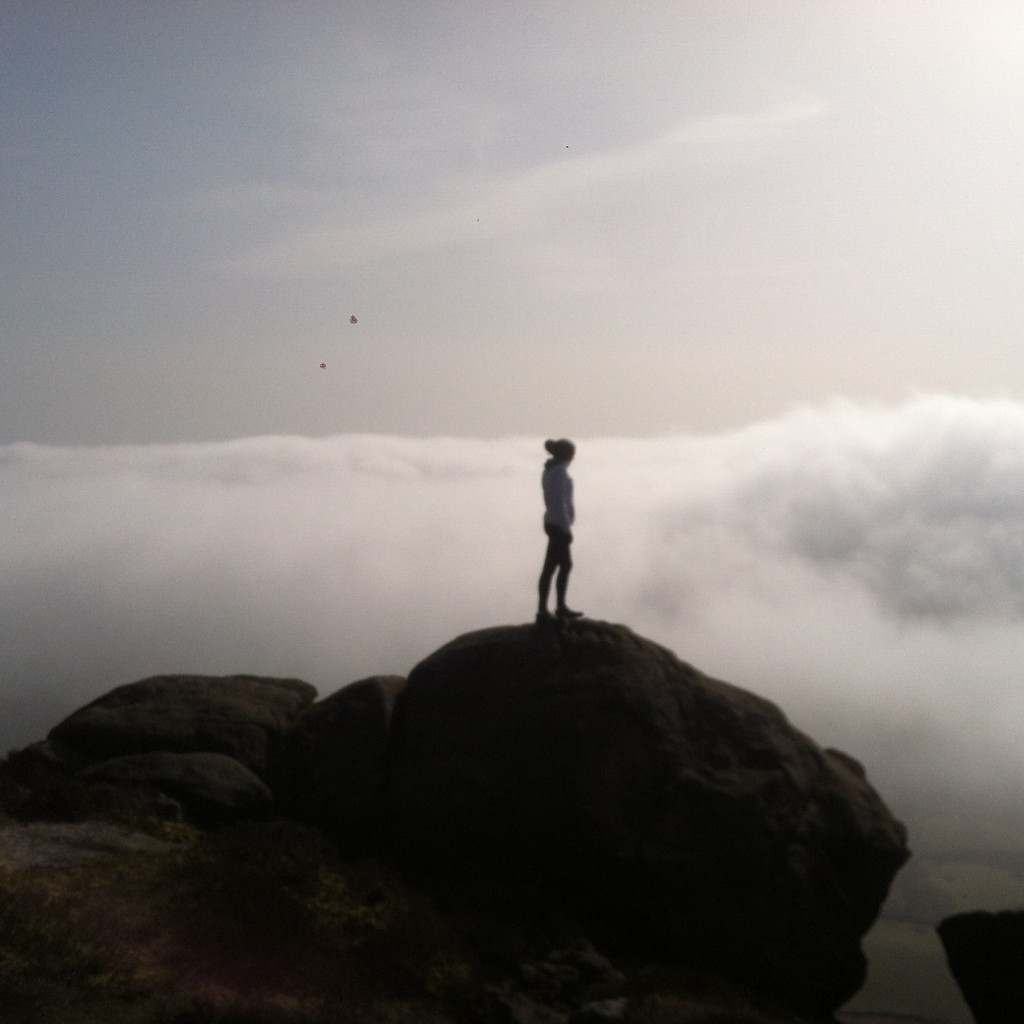 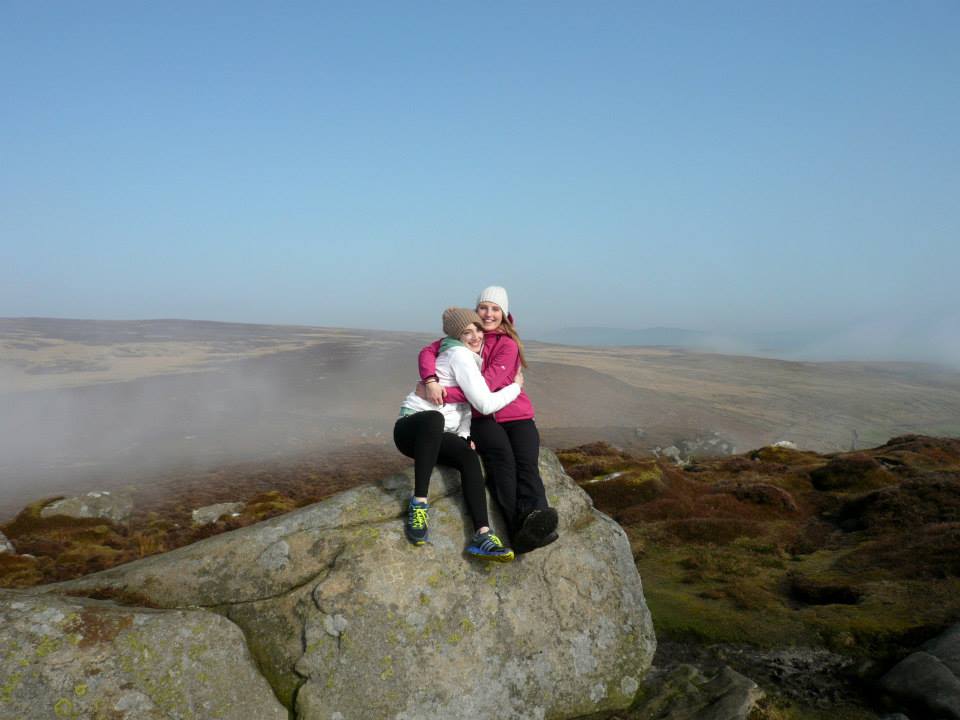 The spectacular countryside of England

This was my first England hike, but I am sure more are to come. There will be plenty more to do in Bradford and all over Europe, and I can’t wait to tell you all about it!